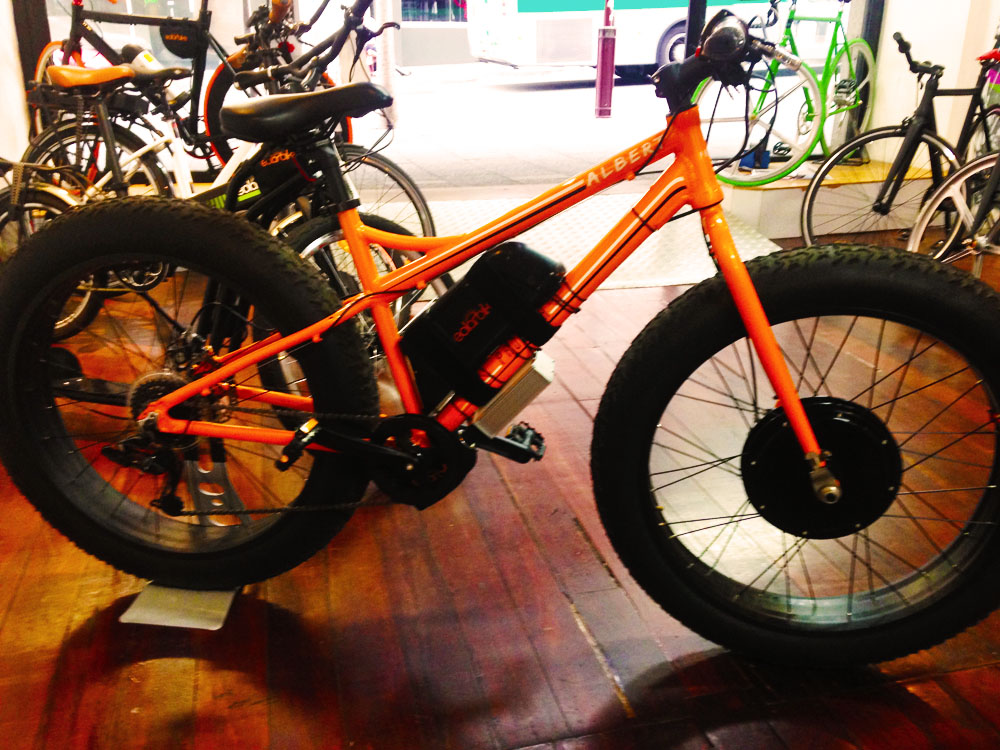 Yes, you read that right!  This is a 1000 Watt E-bike conversion that we put together for Dion earlier this week.
Fatbikes are fast becoming popular in Australia for use on sand and hardpack gravel as well as for general recreational use and it’s easy to see why: the level of comfort provided by 4″ mountain bike tyres is absolutely second to none, also let’s face it: they’re just cool.

Dion had one such Fat- bike- The PROGEAR Albert. It’s a Steel Framed fully rigid Fatbike with SRAM X-4 wide ratio gears and mechanical disc brakes. Dion was able to source a motorised front hub laced to the enormous 26″ x 4″ rims capable of accepting a Fatbike tyre. the motor itself was rated at approximately 1000Watts, so we paired it with a 48Volt 11.6 Ah Black Diamond battery kit- a power source more than up to the task.  It was certainly one of the more unusual builds we’ve done over the years, but we’re glad to say that it came together very well. The Fatbike is well known to not be a particularly rapid machine, but with an electric conversion, it’s mesmerisingly quick to accelerate for a bike of this kind and can comfortably reach a top speed of 32 km/h based on our test. The expected range is probably between 20 and 25 kilometres (perhaps more depending on the level of pedalling input) which should make this bike a suitable recreational machine.

These conversions don’t come around too often given the difficulty in sourcing compatible motorised rims, however, given the increase in popularity of Fatbikes in the United States and Europe, we might soon see a greater availability of parts and conversion options in Australia. Watch this space!